Expiration of the Renewable Energy Tax Credit in NC: The end of an era or an impetus for innovation?

Notable at present for the expiration of North Carolina's 35% renewable energy investment tax credit, the end of 2015 will always represent a milestone in the history of the state's renewable energy market. After languishing virtually unused for the vast majority of the nearly 40 years since it was first enacted, the renewable energy investment tax credit became the state's largest economic incentive in its last few years with a value more than double the next largest incentive. Mostly used by investors in solar power projects, the tax credit's expiration raises questions about the future of the nation's second largest solar power market.

For the previous two years, North Carolina has the second largest solar market in the country, ranked behind only California, according to data reported by the Solar Energy Industries Association (SEIA). As of late 2015, SEIA reported that N.C.'s cumulative installed solar capacity was 1,264 MW, equal to 1.4 times the capacity of the reactor at the Shearon Harris Nuclear Power Plant. While solar power's rapid growth in the state is due to a variety of factors, including the 2007 enactment of the Renewable Energy & Energy Efficiency Portfolio Standard (REPS), standardized interconnection agreements along with other facilitative regulatory practices, and the rapid decline in the cost of solar power equipment, the availability of the state tax credit provided a value stream to solar power projects that helped fuel investment well in excess of $700 million during tax year 2014 (most recent year for which data are available).

Renewable energy investments in the state were 22 times higher in the 2014 tax year than in the 2010 tax year. A third of all tax-based economic incentives claimed in the state were for the renewable energy tax credit in the 2014 tax year, with 1,702 taxpayers claiming $126.7 million in tax credits – more than the next two largest economic incentives combined, according to data from the N.C. Department of Revenue.

Between tax year 2010 and 2014, tax credits worth a total of $224.5 million were claimed based on renewable energy investments of nearly $1.5 billion – resulting in credit claims to-date equal to about 15.4% of investment, according to Department of Revenue data through tax year 2014. The accompanying chart shows the number of taxpayers who claimed the credit and the amount of credit claimed as a portion of investment in each tax year. Since the credit is taken over a period of five years and may be carried forward, the amount of tax credit claimed as a percentage of the investments in a given year varies. 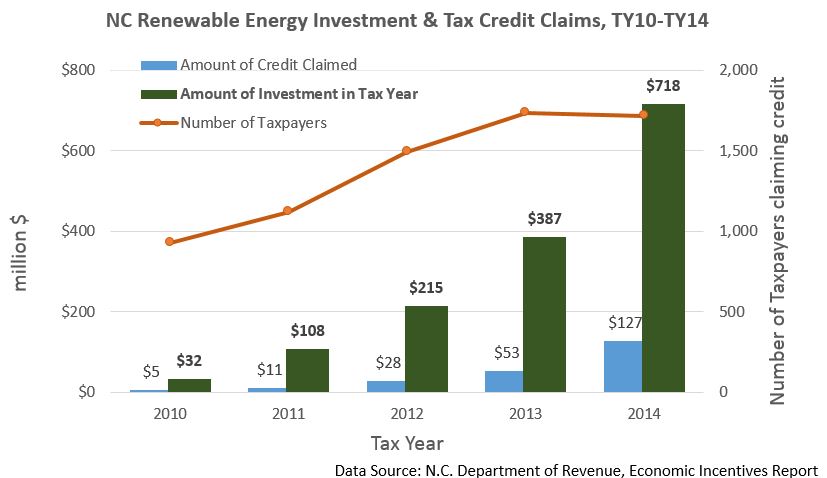 While the state tax credit certainly played a large role in driving the rapid growth of solar power across the state, its expiration coupled with the looming drop of the federal investment tax credit from 30% of installed costs to 10% over the next few years will unquestionably change the dynamics of the solar market in the state. The combined value of these two tax credits represented an after-tax net present value equal to approximately 50% of the cost of a PV system, and their loss will require new approaches to financing and leveraging new sources of value if the market is to continue its growth in years to come and maintain North Carolina's status as a national leader in renewable energy.

Looking forward, there are some indicators that solar power has a strong, if somewhat different, future in North Carolina. The adaptation of the solar industry to the changing market environment is evidenced by the increasing levels of activity in both small-scale residential and commercial projects as well as the rise of large-scale projects of 10 MW or greater and the continued escalating involvement of the state's largest investor-owned utility.

In a January 2016 press release, the company confirmed that it installed 300 MW of solar power during 2015 and announced another 75 MW slated to be added in 2016. The company's projects are increasingly oriented towards serving the solar demands of other major industries in the state, including its first solar project located at a military base, a power purchase agreement with a 61-MW solar project to serve Google's Caldwell County data center, and the 80-MW Conetoe project which is largest solar project east of the Mississippi and for which Duke recently signed a power purchase agreement under which the facility's output will be sold to Lockheed Martin and Corning.

While the state's solar market is shifting into larger-scale projects, the level of activity at smaller scales is also increasing. There have been at least 18 "Solarize" initiatives undertaken in communities across the state where interested community members agree to have multiple residential-scale solar power projects installed at the same time in order to benefit from cost savings and economies of scale. According to the Solarize-NC website, these projects have facilitated 470 small-scale PV installations with a combined installed capacity of nearly 2.5 MW. Another promising development, driven largely by rural electric cooperatives, is the rise of community solar, a development model where electric cooperative members can opt-in to purchase a share of the output from a share solar facility owned and operated by the local electric cooperative. Several of these initiatives are underway at electric cooperatives across the state, including Blue Ridge EMC, Pee Dee EMC, Roanoke Electric Cooperative, Surry-Yadkin Electric, Tideland Electric, and Cape Hatteras Electric Cooperative. Other efforts by groups such as the Boone-based Appalachian Institute for Renewable Energy (AIRE) are underway that utilize innovate financing models to facilitate cost-competitive access to solar power by non-profit and government organizations, and efforts to permit, on a limited basis, a non-utility third party to install a solar power system and sell the output to a single retail customer – commonly called third-party sales or third-party solar – are being adjudicated before the N.C. Utilities Commission (Docket SP-100, Sub 31).

Overall, the expiration of the state's tax credit will have a significant impact on the solar industry, but with creative efforts at adaptation and supportive policy innovations that impact need not necessarily be completely negative. The rapid growth of the solar market within the state produced a key economic advantage that is not easily reproducible – experience. As these new initiatives emerge and new solar markets develop, the future of solar will be built on the industry's experience and, given the recognition and support due a billion-dollar-per-year market, perhaps emerge into a highly sustainable source of distributed energy for North Carolina that is poised to innovate new sources of value and increasingly equitable approaches to energy market development in a carbon-constrained future.