The Nexus group has successfully carried out several projects to improve the energy efficiency of the high-tunnel greenhouse. The team improved insulation and ventilation systems, installed solar-thermal heating for the hydroponics, and modeled an Earth-Air Heat Exchange (EAHE) as part of a feasibility study. We will continuously analyze the data to fine-tune the systems to provide best practices for energy-efficient high tunnel operation in the region.

The Nexus hydroponic system consists of three beds and a pond that holds about 700 gallons of water. The design of the Nexus hydroponic heating system is similar to the Nexus pilot systems installed on the partner farms. Solar energy collected from the collector (30 evacuated tubes) is transferred indirectly through a heat exchanger in the heat storage tank to the pond water. The water pumped from the pond is heated by solar energy in the heat storage tank before being delivered to the hydroponic beds. A bell siphon and a small pump allow the beds to be constantly fed and drain water every two hours. Thus, the hydroponic bed as well as the pond are kept warm with the remaining heat. The data in Figure 3 shows that the pond temperatures stayed above 57°F at night when the inside air temperature was 46°F.

According to this modeling study illustrated in Figure 4, there is no significant difference in the performance of the two scenarios in the cold season, but the scenario of EAHE in the external ground appears to provide cooler air (around 5°C lower than EAHE in the internal ground) in the summer.

Partnering with local nonprofit Blue Ridge Women in Agriculture, we held a workshop and open house event at the Nexus site in April. Eight undergraduate and graduate students presented and demonstrated their ongoing research projects to the participants at the Nexus and provided tours of the research site. Participants -which included a farm manager and home gardeners- showed great interest in the students' research and the Nexus project.
The topics covered during the workshop are as follows:
- Small-scale anaerobic digestion system for fertilizer and biogas
- Hydroponic system and AD effluent as hydroponics nutrient
- Raised bed heater
- Solar heating for hydroponic system
- Greenhouse retrofit and environmental monitoring
- Dynamic lighting controller
- Biochar production systems as soil amendment
- Compost research for cold-weather months (Aerated Static Pile) 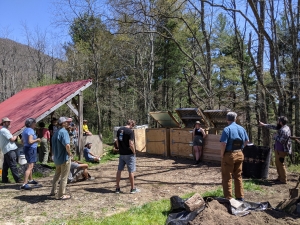 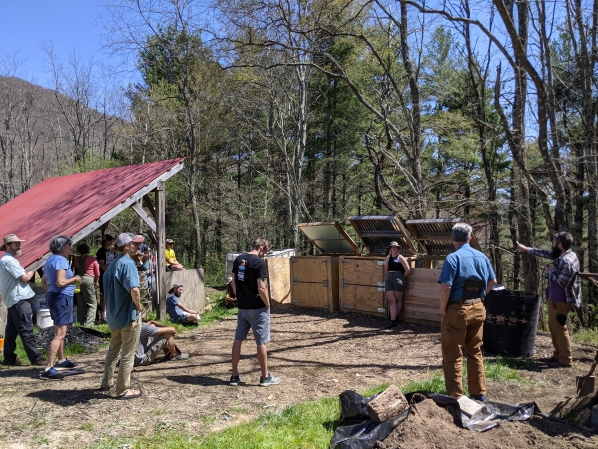