Showing People How To Potentially Live Off the Grid

Amid the energy and music at the fall Lake Eden Arts Festival (LEAF), a team from Appalachian State was creating their own energy by running a mobile microhydro system down by a creek.

“We had people coming up to us who were curious about what we were doing, some were interested in sending their son or daughter to Appalachian, and others just wanted to shout ‘Go ‘Neers,” said Brent Summerville, Practitioner-in-Residence in Appalachian State’s Sustainable Technology and the Built Environment (STBE) department and LEAF-goer for the past 20+ years.

“This was really an off-the-grid demonstration. The turbine ran continuously and even with the low output we were able to generate enough power to run lights and charge phones,” Summerville said. “You work with what you have; less is more.”

The mobile microhydro project was funded during summer 2019 using a $5,000 grant from the Appalachian Energy Center. To demonstrate the technology, the team needs a water source such as a creek, to generate power.

“When we arrived at the festival, our volunteers, which included STBE students, measured the creek to find a spot to build an intake,” said Summerville. “The students installed the 500 feet of penstock pipe, the creek water flowed down hill, gained pressure and turned the Powerspout generator which delivers electricity to our battery bank.

“We plan to take the microhydro to other creeks in Western North Carolina to help demonstration this technology,” Summerville said. 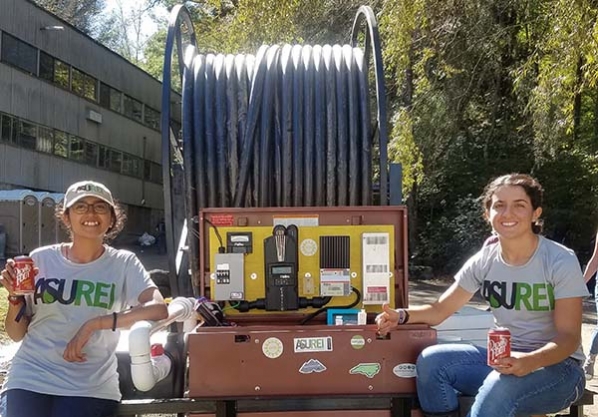