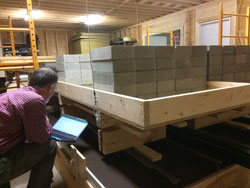 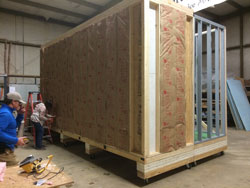 Researchers from the Energy Center and the Department of Sustainable Technology and the Built Environment are building a large thermal testing chamber to measure the insulating value of different wall systems. The chamber can accommodate a 8-foot by 16-foot wall for testing. The testing system includes two highly insulated chambers that are on wheels. The metered chamber is a guarded hot box, with outer surrounding plenum heated to the same temperature as the interior of the the chamber. The climatic chamber is cooled by a chiller system that can reach 14 degrees F (-10 degrees C). The box will include over 600 temperature sensors to collect data, as well as other instrumentation to measure air flow and electricity consumption. The team, which includes Jeff Tiller, Chuck Perry, Jeff Ramsdell, Brian Raichle, Ok-Youn Yu, and graduate student Brittany Auten, are hoping to be able to begin testing different wall systems by mid-January.